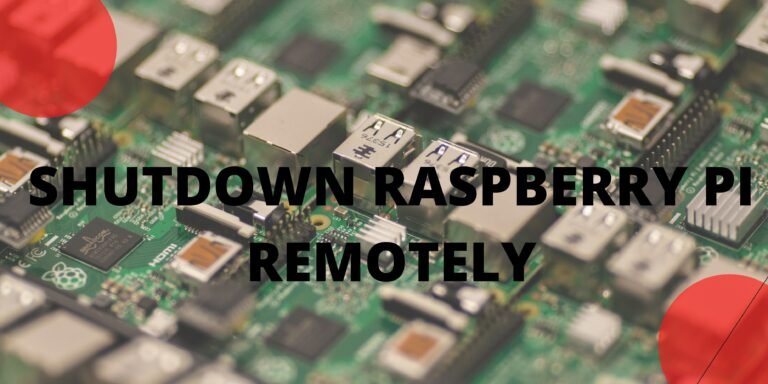 Because the Raspberry Pi lacks a native power button, your first inclination will likely be to yank the power line to turn off your Pi. However, it is strongly advised that you avoid doing so because it can have disastrous effects. There is a substantial risk of damaging your SD card and file system data if you do this.

Furthermore, if anything is running at that moment, it will not exit gracefully and save. That is, if you pull the power cord abruptly before shutting down your system, it is termed a forced exit and may result in significant data loss depending on what your Pi was running at the time.

So, avoid this procedure at all costs and instead employ the method outlined below.

How to Remotely Shutdown a Raspberry Pi (Via SSH)

If you use SSH on the same network, you can connect to your Raspberry Pi’s command line from another device. It can function as a remote device, allowing you to connect to it from another machine.

Once configured, you’ll be able to shut down your Raspberry Pi from another computer or device if it’s more convenient when working on several projects. The Raspberry Pi website goes over how to utilize SSH with your device.

SSH will also allow you to log out from a mobile device rather than another PC. This is important when you want to shut down software running on your Raspberry Pi but cannot access it for various reasons.

This method can be used to shut down your Pi in a secure manner remotely. To control your Raspberry Pi, we’ll use the Secure Shell Protocol. To use this procedure, you must perform the following:

1. Check that SSH is enabled on your Pi.

4. Use any of the following instructions to shut down the Raspberry Pi:

It’s as easy as pie! Turning on your Raspberry Pi is a straightforward process, and all you have to do is plug the USB power cord into the port on your Pi.

Is it possible to simply disconnect my Raspberry Pi?

Is it safe to turn off the Raspberry Pi?

No, it is not advisable to unplug the plug simply. This can result in several problems, including the corruption of your SD card and file system. Your Raspberry Pi must shut down properly. Fortunately, you can accomplish this easily, and there are some enjoyable projects you may design to assure a shutdown without unplugging your device.

What happens when you turn off the Raspberry Pi?

To begin with, by removing the power cord too soon, you increase the likelihood of your SD card getting corrupt. Second, everything that is currently running will not exit and save. Depending on what your Raspberry Pi was doing at the time, this forced exit may result in data loss.

How can I power down my Raspberry Pi 400?

The F10 key can be used to safely turn off (and on again) the Raspberry Pi 400. Hold down the Fn+F10 keys for two seconds to turn off the computer. This carefully shuts down your operating system, ensuring that your memory card is not corrupted. F10 (or Fn+F10) is used to turn the computer back on.

Which command will turn off the Raspberry Pi, allowing you to unplug it safely?

Can I leave the Raspberry Pi turned on all the time?

How can I tell whether my Raspberry Pi is turned off?

Your Pi cleans up the mess, but it shuts down and stays shut down this time. When the blinky light on the Pi board stops flashing, and your display or TV turns blank, you can switch off the power. The power light on the Pi board is red, and it continues to operate even after the board has been turned off.

How can I start my Raspberry Pi from afar?

Add an empty text file named “ssh” (no file extension) to the card’s root directory. When Raspberry Pi OS hears “ssh” on its first boot, it will immediately enable SSH (Secure Socket Shell), allowing you to access the Pi command line from your PC remotely.

What is the Raspberry Pi’s power requirement?

The first, most recommended, and most straightforward way to power the Raspberry Pi is through the Micro USB port on the unit’s side. 5V is the recommended input voltage, while 2A is the ideal input current. The Raspberry Pi’s standard power supply at The Pi Hut is 5.1V @ 2.5A.