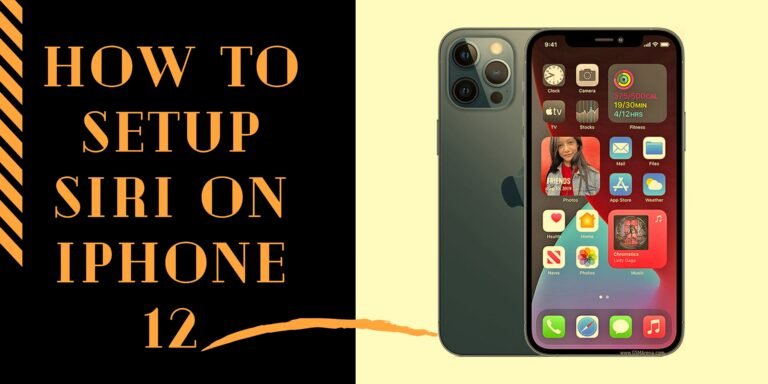 You can add a variety of tools to your iPhone 12. You can use a case, headphones, or even a USB flash drive. On the other hand, Siri is by far the best support you can get on your iPhone 12.

With a simple “Hey Siri,” you can access a plethora of tools and functions without having to use your hands. Using Siri is simple; here’s how to set it up on your iPhone 12.

Once you have been able to enable Siri on your iPhone 12, you may reach it by saying “Hey Siri” or long-pressing the button on the right side of the phone.

With the iOS 14 Siri upgrade, the voice assistant no longer fills up the entire screen. Instead, a colorful indicator appears at the bottom of the screen to show that it is listening to your query or request. When you react, the responses appear as widgets and banners on a piece of your phone’s screen, but they don’t take up the entire screen.

How to set up Siri on iPhone 12

To avoid accidental — or malicious — activation, “Hey Siri” now tries to lock on to your voice. You can configure it when you first get your new iPhone 12 or at any time in Settings.

1. Go to your Home screen and select Settings.

3. Select the Listen for the option “Hey Siri, toggle the switch to turn it on.

4. You’ll be sent to the Setup screen, where you may train Siri to recognize your voice. Go to the train section to finish configuring Siri.

How to Teach “Hey Siri” to Recognize Your Voice

You’ll need to train “Hey Siri” to identify your voice as soon as you turn it on, whether as part of the setup process or later.

Siri has recognized your voice and is ready to go!

How to Apply “Hey Siri!”

Learning to use Siri is simple, but saying “Hey Siri!” is ridiculously simple. To begin your interaction, you say, “Hey Siri.”

1. Place yourself inside the audio range of your iPhone or iPad.

2. Say “Hey Siri!” loudly enough so that your iPhone or iPad can hear you.

3. Tell Siri what you want it to do, such as “call mom on speaker,” “make a dinner reservation,” “what’s the weather in Bermuda?” and so on.

How to Make Siri Work as an Intercom

The intercom option, available if you have numerous Apple devices in your home, is another tool you may find helpful while using Siri on the iPhone 12. Apple intelligent home products, iPhones, iPods, Apple Watch, AirPods, and even CarPlay support the intercom capability.

Say, “Hey Siri, tell everyone [your message]” to activate the feature. Siri will transmit the messages to any devices that are connected, and receivers can react by saying, “Hello, Siri, please replay [their response].

Messages sent via the intercom feature are played on HomePod and AirPods and appear as notifications on iPhone 12.

Updates to Siri in iOS 14

The iOS 14 Siri upgrade (installed on the iPhone 12 at release) features several changes to the voice assistant’s design and capabilities. Aside from the improvements to the aesthetic stated above, the following features were added or improved:

• More Accurate Answers: According to Apple, Siri handles more than 25 billion inquiries per month. Apple claims Siri now possesses 20 times as many facts as a few years ago since Siri had to learn a lot to handle those requests. In addition, the virtual assistant’s ability to deliver responses via the web has been enhanced.

• Smarter Suggestions: Among the Siri enhancements is a handy Shortcut Suggestions widget, which allows it to propose things that you perform regularly. Siri may recommend opening maps or ordering a latte from your favorite coffee shop when you get in your car. Your home screen or today’s view (or both) can also display these suggestions.

• ETA Sharing: If you’re meeting another iPhone 12 user and want to offer them an estimated arrival time, you can tell Siri to “Share my ETA.” Siri then transmits your estimated arrival time to that person using Apple Maps. However, there are a handful of cautions. You must have already begun navigation in Apple Maps, and your Apple ID email address is utilized to share your projected arrival time.

• Voice Messaging: Using iMessage or MMS text messages, Siri can record and deliver voice messages for you (which means you can even send audio files to Android users). Simply saying “Send an audio message to” causes Siri to record and send the audio. You can listen to it, cancel it, or rerecord it before sending it. You may also accomplish this with CarPlay.

• Enhanced Translation: With iOS 14, Siri’s translation services improved. There are now 65 language pairings available, and the translation does not require an internet connection. Furthermore, the translations are much more fluid than in the past.

• Map-Based Cycling Directions: If you need cycling directions, you can now ask Siri, “What are cycling directions to [name of place you’re redirected to Apple Maps for the correct directions if Siri doesn’t understand or recognize the location that you’ve requested directions for.

• Automated Reminders from Mail: Siri can recognize and offer possible reminders from email in iOS 14. If you find yourself creating a lot of email reminders, this is a handy function to keep you on track.

Apple’s iOS 14.5 upgrade, which will be launched in April 2021, will contain more Siri improvements. iPhone users may now customize the voice Siri uses when answering queries, and there is no longer a default tone of voice. When someone initially configures their device, they can select from a more diverse, natural-sounding collection of settings.

In addition, the 14.5 update adds further Group FaceTime capability to Siri. In Messages, it’s now easy to initiate calls with several persons or groups. Incoming calls can also be announced by Siri using Apple AirPods or compatible Beats headphones. If an iPhone user requires assistance and cannot make the call themselves, Siri can dial an emergency contact for them.

Don’t confuse it with “My voice is my passport; please authorize me!” Instead, it’s designed to address the issue of unintended activation, which might be accidental, a prank, or even hateful.

If you’re concerned about security, turn off “Hey Siri” and use manual activation instead. If you want to use voice activation while caring for children, cooking, working, or otherwise having your hands full, be aware of the limits but enjoy the usefulness.