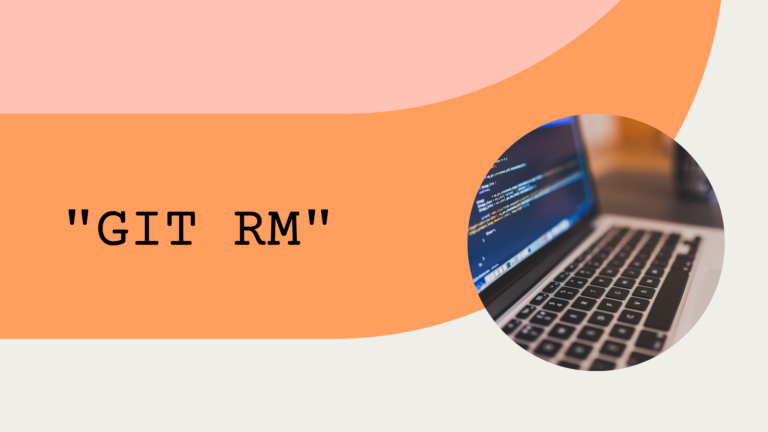 The term rm in Git stands for remove. It is used to delete a single file or a group of files. Git rm’s primary job is to delete tracked files from the Git index. It can also be used to remove files from both the working directory and the staging index.

The files being removed must be suitable for the branch. The index cannot be used to stage modifications to their contents. Otherwise, the removal process can be complicated, and it may not occur at all. However, the -f option can be used to force the operation.

There is no way to remove a file from the working directory alone. The files being worked on must be the same as those in the current HEAD.

Git will prevent the removal of a file if there is a difference between the HEAD version and the staging index or working tree version. This block serves as a safeguard against the removal of in-progress updates.

Specifies the files to be removed. The value of the option might be a single file, a space-separated list of files file1 file2 file3, or a wildcard file glob (./directory/*).

The -f option overrides Git’s safety check, which ensures that the files in HEAD match the current content in the staging index and working directory.

The “dry run” option is a precautionary measure that executes the git rm command but does not actually destroy the files. Instead, it will report the files that would have been removed.

The -r option stands for ‘recursive.’ When used in recursive mode, git rm will delete a target directory and all of its contents.

The separator option is used to differentiate between a list of file names and the arguments supplied to git rm. This is handy if some of the file names contain syntax that could be confused with other options.

The cached option specifies that the removal should only be performed on the staging index. The files in the working directory will be left alone.

Even if no files matched, the command will exit with a sigterm status of 0. This is a status code at the Unix level. The value 0 indicates that the command was successfully invoked. When using git rm as part of a larger shell script that needs to fail gracefully, the —ignore-unmatch option can be useful.

The silent option hides the git rm command’s output. Normally, the command prints one line for each file removed.

To make this easier to understand, let’s take a look at this example below:

The git rm command is used to remove the files from the working tree and the index.

The file newfile.txt has been removed from the version control system in the output above. As a result, both the repository and the status are marked as removed. If we merely use the rm command, the file will not be permanently deleted from Git. It is trackable in the staging area.

By committing it, we can get it back on the version control system. To commit the file, add it to the index first, and then commit it. Run the following command to include this file in the index:

The file will be added to the index as a result of the command above. Run the following command to commit it:

It will commit the file and add it to the version control system. Consider the following result:

In the above output, we are retrieving the file from the staging area and transferring it to our directory. The file harrychoms.txt has been re-added to our repository.

How to Reverse Git Rm

Executing git rm does not result in a permanent update. The staging index and working directory will be updated by this command.

These modifications will not be saved until a new commit is produced and the modifications are committed to the commit history. This means that the changes made here can be “undone” with standard Git commands.

The current staging index and working directory will be reset to the HEAD commit after a reset. This will reverse a git rm.

A checkout has the same effect, restoring the most recent version of a file from HEAD.

If git rm was used and a new commit was made to sustain the removal, git reflog can be used to find a ref that existed before the git rm execution. The git rm command’s scope

The git rm command only affects the current branch. Only the working directory and staging index trees are affected by the removal event. Until a new commit is created, the file removal is not saved in the repository history.

Why should you use git rm instead of rm?

When a regular shell rm command is done on a file that is being tracked, a Git repository will detect it. The working directory will be updated to reflect the removal. With the removal, the staging index will not be updated.

To add the changes to the staging index, an additional git add command must be run on the removed file paths. With the removal, the git rm command works as a shortcut by updating the working directory and the staging index.

This example uses a wildcard file glob to remove any *.txt files that are children of the Documentation directory and its subdirectories.

In this example, the asterisk * is escaped with slashes; this is a safeguard that prevents the shell from expanding the wildcard. Following that, the wildcard expands the pathnames of files and subdirectories in the Documentation/ directory.

This example employs the force option to target all git-*.sh files with a wildcard. The force option removes the target files from the working directory as well as the staging index.

How to Delete Files That Are No Longer in the Filesystem

As stated above in “Why use git rm instead of rm?” git rm is a convenience utility that combines the standard shell rm and git add to remove a file from the working directory and boost that removal to the staging index.

When multiple files are removed from a repository using only the regular shell rm command, the repository can become clumsy.

If you intend to record all intentionally removed files in the next commit, git commit -a will add all removal events to the staging index in preparation for the next commit.

If, on the other hand, you want to permanently delete the files that were removed using the shell rm, use the following command:

This command will build a list of the files that have been removed from the working directory and pass that list to git rm —cached, which will update the staging index.

The git rm command only works on the current branch. Only the working directory and staging index trees are removed. It is not kept in the repository history until a fresh commit is made.

Git rm is a command that removes files from the working directory and the staging index, two of Git’s key internal state management trees. To remove a file from a Git repository, use git rm.

It’s a shortcut that combines the impact of the default shell rm command with the git add command. This means that it will remove a target from the filesystem before adding the removal event to the staging index.

The command is one of many in Git that can be used to undo changes.