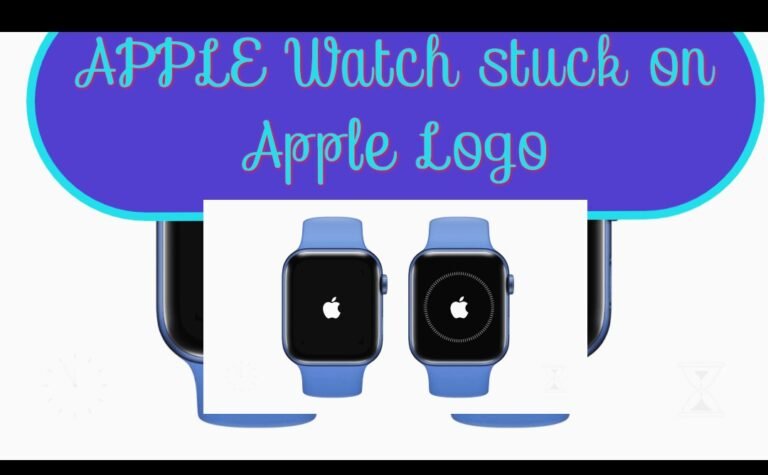 An Apple Smart Watch can easily be considered a reliable Personal Assistant, helping you keep up with your meeting schedules, gym sessions, and weekly exercises, and that’s why it gets so frustrating to see the Apple watch stuck on the Apple logo during boot-up.

Much like the iPhone, iPad, and Apple MacBooks, an Apple Smart Watch is not just a wristwatch but more of a digital assistant that offers aesthetic satisfaction and functional effectiveness due to its toughness and resilient build.

This article will discuss the various causes of Apple Watch Freezing on the Apple Logo screen and what you can do to fix it.

The most recent Apple Smart Watch is in its 8th Generation and 8th series, so the Apple Watch has come a long way and currently has more than 100 million units in human hands.

You’ll be glad to know the issue may not be as severe as you imagined initially, and there’s no reason to panic.

1. Technical Issues with the OS software

Although Apple products are known to be the safest and most secure tech devices available in the market today, one can still encounter technical errors now and then during use.

While this is a scarce scenario, it’s not altogether impossible and shouldn’t be ruled out.

A weak Apple Watch Battery would ultimately limit its performance. In some critical situations, the output voltage from a damaged battery may be too weak to power the Apple Watch, resulting in the Device getting stuck on the Apple Logo Screen.

Your Apple Watch getting infected is highly unlikely, thanks to a limitation that prevents the Apple watch from connecting to iOS mobile devices and other android devices, except the iPhone.

However, it would help if you were wary of ransomware attacks on your iWatch. Those can be pretty nasty and prove difficult to erase.

The Apple Watch is designed to minimize hardware requirements as much as possible.

Rip open your Apple watch, and all you’ll find is an S1 chip and various sensors that detect your daily physical activity using LED light and infrared detectors.

Other components include a GPS, accelerometer, and WiFi. A fault with these components might be responsible for the Apple watch not booting correctly.

Apple Watch VoiceOver is an excellent way of accessing the various functions of the Apple Watch, even when there are some issues with the display.

Its operation is pretty straightforward; once turned on, you’ll hear an audible voice reading out various functions on the Apple watch as you scroll through them.

Some reports of failed Apple Watch VoiceOver settings prevented the Apple Watch from turning on.

A final probable cause for an Apple Watch that won’t turn on could be pairing issues with your iPhone.

It’s essential to verify the connection status of the Apple Watch with your iPhone, especially during critical updates or media uploads; any errors encountered during pairing could lead to the Apple Watch Freezing on boot-up.

This is also called Force -Starting the Apple Watch, and it’s the first and easiest step, to begin with when troubleshooting your Apple Smart Watch.

Restarting the Apple Watch is straightforward; hold down both the Digital Crown and Power Button together for a minimum of 10 seconds until the Apple Logo appears on the screen before releasing the buttons.

If you’re able to restart the Apple Watch successfully, you’ll notice that the boot-up freezing is bypassed, and your Apple Watch will power on smoothly once again.

Failure to restart successfully might indicate a more serious underlying issue, and you should attempt the following fixes discussed below.

Your Apple Watch usually comes with a robust Inbuilt battery that can last as long as 18 hours of active use.

But as time goes on, the battery power diminishes, and you may need to get a replacement. You’ll know it’s time to request a replacement when you notice the Apple Watch no longer stays on for 4-5 hours.

If your Apple Watch doesn’t boot up past the Apple logo screen due to a weak battery, you can plug it into its charger and try restarting it again; if this works, you know the battery is due for a replacement.

Another easy trick to force your Apple Watch to go past the Apple logo screen is by attempting full battery recycling.

To do this, first, allow the Apple Watch to get completely drained of its battery power. You’ll know this has happened when the Apple Watch goes off and refuses to turn back on after staying on the Apple logo screen for a long time.

Once the battery is completely drained, you can plug in your charger. Hopefully, this clears all software glitches preventing the Device from booting up initially.

As we mentioned earlier, the Apple Watch VoiceOver helps navigate the Device when one can’t view the screen, using voice commands and instructions.

You can also Force-Start your Apple Watch using the Find My Apple Watch feature on your iPhone or iCloud.

6. Restart the Apple Watch Connection with Your iPhone

Restarting the Apple Watch WiFi connection with your iPhone will complete the data syncing process preventing the iWatch from booting correctly.

You’ll be required to enter the device password. Once this is done, your network settings will be reset, and you can reconnect to the Apple Watch.

This involves a complete data wipe and may lead to data loss, but it’s a great way to remove any corrupted data preventing the Device from booting up.

Updating your Apple Watch is beneficial in every way.

If none of these steps worked for you, contacting the Apple Watch Tech Support team is the best option for more professional advice.